As a child I swam at my local swimming club but I quit when I went to university. Let’s say I enjoyed my university years and the weight unfortunately piled on and to be honest a was a big girl in the first place!
I was so determined to get fit again and loose weight for my wedding I started running after work and at weekends. With this new found passion for sport I was dragged along to the local triathlon club by my friend to try out one of their swimming sessions, which I loved! I signed up to the club straight away but felt as though I was nowhere near fit enough to take part in a triathlon so I continued to attend the training sessions and volunteered at the club events. After seeing how supportive and inclusive the triathlon community was I decided to bite the bullet and enter my first triathlon at Nantwich in 2013 (picture below) 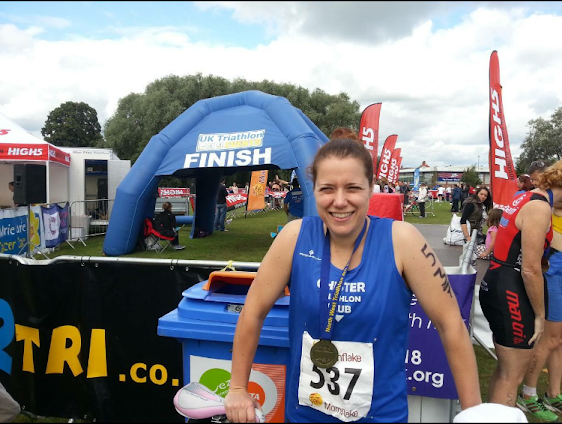 That was it I was hooked, I bought a road bike, a wetsuit and started looking for events to enter the following year. Where things started to take off for me was when my training buddy mentioned that if I had registered my intent to qualify for the Great Britain age group team I would have potentially got a place. I obviously didn’t believe him but thought I would give it a try. I very surprisingly managed to qualify for both the standard and sprint distances at the 2017 World Triathlon Championship in Rotterdam but as the races were on the same day I decided to go for the sprint distance. Unfortunately I pulled my calf before heading out there which I was completely gutted about but thought I would just pull up my big girl pants, tape myself up, take it easy and enjoy the experience fully without the pressure. Well what an experience it was. It was such a honour to wear the GB kit and having people shout and cheer for you all the way around the course was just something that I can’t explain, but what I do know is that it’s made me hungry for more! 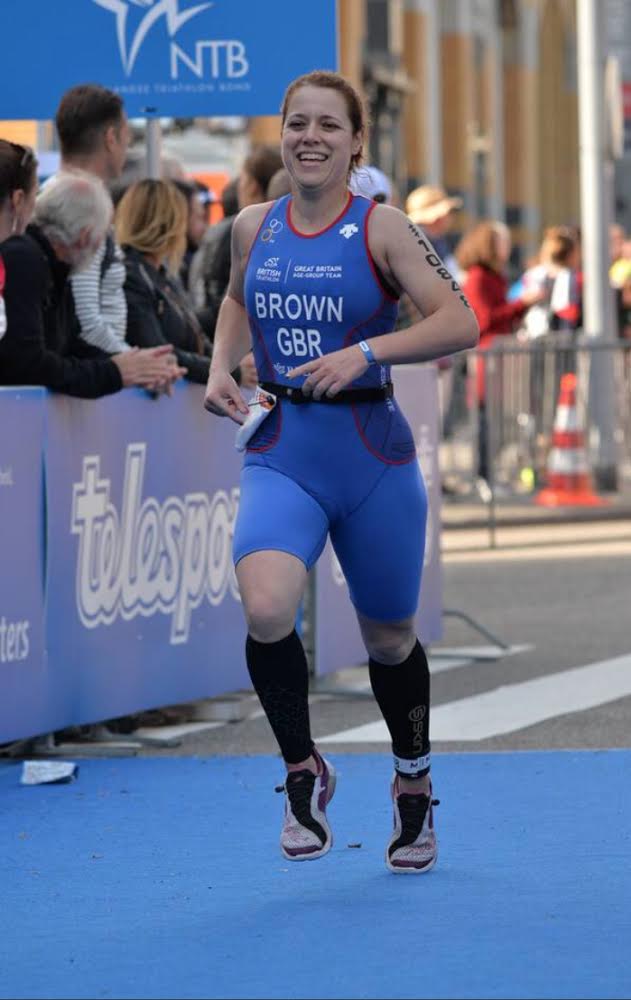 I somehow managed to finish 10th at those championships and that was carrying the injury I had. The result at these championships made me even more determined to do it again but hopefully injury free.
I have been extremely lucky to have represented Great Britain this year at both the World Championships in Australia and the European Championships in Glasgow. I am so incredibly proud of the results I got at these events but I still feel as though I have so much more to give and so much further to go with it. My ultimate dream with regards to triathlon is to podium at a championship event. The closest I got was 5th at Glasgow and unfortunately that was also coming off the back of an injury so I hadn’t been running in the run up to the event.
I still to this point haven’t been coached which people sometimes find hard to believe. I am very lucky to have access to fantastic tri club training sessions which I have utilised to my advantage so far. The boyfriend began to coach and advise me on some of the sessions I should be including when we were preparing for Australia which was welcomed and it made me realise that I have taken myself to this point but to get any further I need the help and advice from a professional so I have made enquiries and I have got a coach lined up for the new year.
It’s currently off season at the moment so the training is definitely more relaxed and not as intense but i am already looking forward to ramping it up and to what next years season will bring. So far the target is Ironman 70.3 in Majorca in May and the World Championships in Switzerland in September. I have decided not to participate in the European championships as they are in Russia so it would make traveling quite difficult and it also means taking more time off work.
Triathlon is truly my love and passion, its a community of like minded, supportive and encouraging amazing people and I really can’t get enough of it. It does rule my life, I eat, sleep and breath it. My life revolves around it really, everyday I plan the follow days training, my weekends around long runs or rides or on breaks away I take my kit with me to do sightseeing runs or new swims, I just love it. It’s not a bad thing to be obsessed with really, keeping fit and being out in nature and the fresh air. I am sure in everyone’s life there is something which is their obsession, their love, Triathlon is definitely mine!